Armenian National Agrarian University is one of the higher education institutes of our republic and the only higher education institute in the agrarian sphere in Armenia. In 1994, in result of unification of Armenian Agricultural and Yerevan Zootechnical Veterinary Institutes (which, since the day of their foundation in 1930, have played a great role in promoting and developing agrarian sphere in the RA, as well as in preparing skillful and professional specialists for former USS Republics), Armenian Agricultural Academy was founded.

In 1930, on July 23, USSR Central Executive Committee and National Communist Council made a decision (N 40/237) to establish Yerevan Agricultural Institute on the basis of Agricultural Faculty of Yerevan State University. In the initial period, about 50 lecturers conducted the classes.

For the first academic year, the institute had three departments:
agricultural,
zootechnical (with animal husbandry and dairy farming specializations)
horticultural:
In the next academic year, the zootechnical faculty with its lecturers was transferred to the Yerevan Animal Husbandry-Veterinary Institute. In the next few years, the faculty of agricultural production organization also operated in the institute. 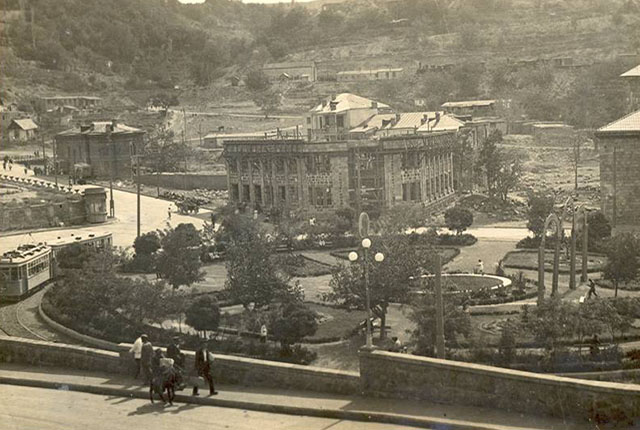 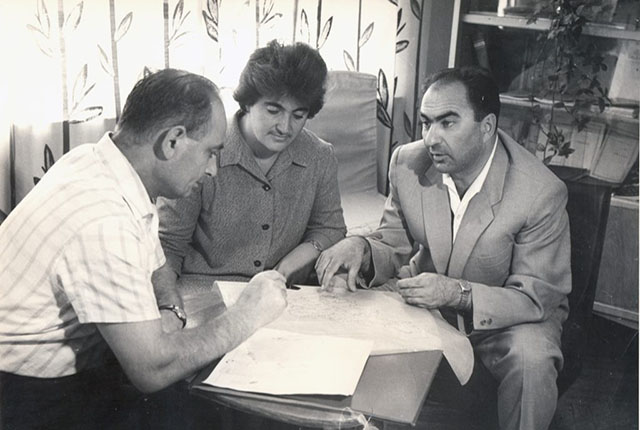 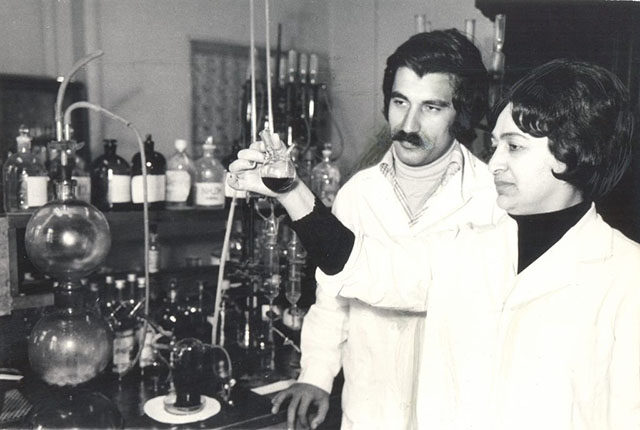 Most of the Institute graduates and lecturers’ names became well-known both in the Republic and outside, among them Academicians: A.A. Matevosyan, G.Kh. Aghajanyan, V.V. Dovlatyan, Professors: Kh. P. Mirimanyan, P.N. Hakobyan, E.M. Movsisyan, D.N. Babayan, S.S. Sahakyan, A.E. Margaryan, H.K. Panosyan, Kh.A. Khachatryan, H.V. Maksapetyan, M.A. Yesayan, Z.A. Melkonyan, A.H. Marukhanyan, P.K. Ter-Zakaryan, S.S. Khachatryan, etc. During the first years there were only 10 departments in the Institute, but further on their number reached up to 34. In 1938 there was Ph.D. Department, and since 1948 the Institute obtained the right of theses defense. The Institute had a rich library – the book fund made over 370 thousand items. Here large-circulation “Gyughatntes” newspaper was published, the first number of which was released in May 1958.

During 64 years of its existence, the Institute gave over 23 thousand graduates and 450 Ph.D. students. Voluminous work was done in training professorate. At the Scientific Councils, there were 21 doctoral and 284 candidate theses defended.

The research work carried out in the Institute was summarized in 53 collected works, over 5550 articles and 90 monographs. Besides, there were published 115 textbooks and manuals, about 800 popular scientific booklets. The staff got 165 author’s certificates and some of the inventions were patented by foreign countries. Under the resolution of the Presidium of the Supreme Council of the USSR, dating October 15, 1980, the Armenian Agricultural Institute was awarded by the Order of “Badge of Honour” for its great contribution to the development of agricultural sciences and training skillful specialists.

In the first half of the 1920s the stock-raising in the Transcaucasian countries was in a critical state, partly, there were no specialized institutions which could raise veterinary and animal breeding on a new level, protecting the population by controlling the zoonotic diseases, as well as work out and introduce new methods of controlling new infectious and non-infectious diseases, improve their breeding and productive abilities. Thus the time urgent requirement was to establish corresponding educational and scientific center.

An interesting fact: in 1930 Professor Noller from Berlin Zooveterinary University, after he had visited to Yerevan Zoo-veterinary Institute, wrote in the magazine ‘Zentralblat Fur Bacteriology” magazine: “The Zoo-veterinary Institute of Transfederation is considered a significant institution in its kind. The foundation of that Institute should be referred to with utmost interest and care, as far as an advanced Higher Educational Institution in Armenian and unique in Transcaucasia is being established, which is considered a bridgehead for zoo veterinary science on the boundary of Turkey and Persia”(Part 1, volume 97, Berlin, 1930). 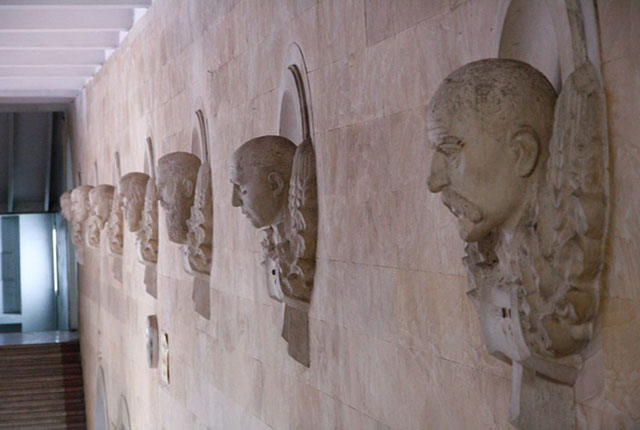 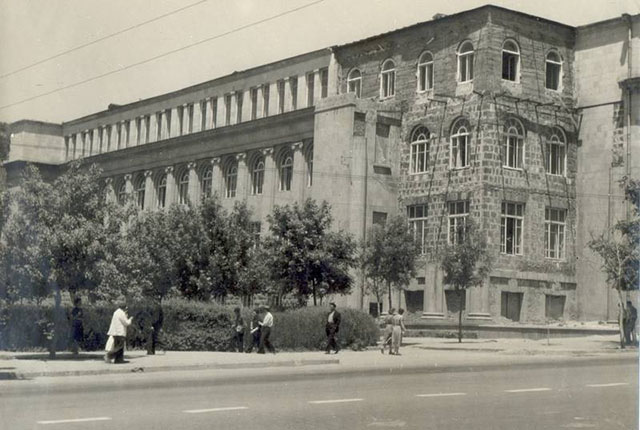 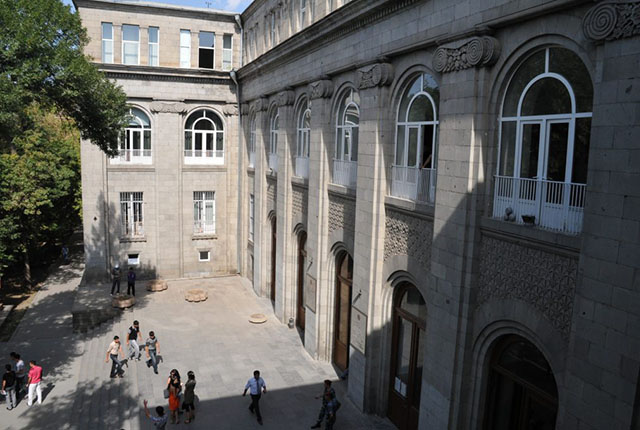 According to the admission plan for the first academic year, there were 130 seats for students: 25 – for Armenia, 35 – for Azerbaijan, 30 – for Georgia, 30 – for Northern Caucasus and Central Asia, and 10 – for the former soldiers.

From the beginning, there were two faculties at the institute:
veterinary,
animal breeding
in 1961 the department of milk and dairy produce engineering technology was established. The Part-time Education Institute was founded attached to the Institute in 1932, which was reorganized into Part-time Education Department in 1950. Since 1965 the extension department and 1969- the social sciences departments have been formed. In 1971 the preparation department was established.

The institute has had a very rich library, the literary fund of which has reached 225 thousand units during the recent years. In 1932 with interruptions, but since 1958 regular publication of the newspaper “For the Staff” started. The institute publishing house was founded in 1946. Throughout its existence the Yerevan Zooveterinary and Animal Husbandry Institute had 16717 alumni.

The Institute’s scientists have carried out tangible scientific research work in the field of animal husbandry, veterinary medicine, dairy production. New high-yielding breeds and types of farm animals have been bred effective methods and remedies for diagnosis of animal diseases, prevention and treatment have been elaborated, new technological solutions for dairy production have been suggested.

The Scientific Research Centre was established in 1974, which included the patent information service.

The results of the scientific-research work carried out at the Institute have been summed up in 64 collected works, 4562 scientific articles, and 87 monographs. 144 textbooks and manuals, 148 science fiction booklets have been published and 136 author’s certificates have been granted. 50 scientific conferences have been held on the scientific research works results, 16 of which were all-union and inter-institutional

According to the decree of  Supreme Council of the USSR on November 13, in 1981, the institute was awarded the “Sign of Honor” medal for its services in the field of training qualified specialists for agriculture and the development of agricultural science.

Professor A.Ts. Khachatryan was appointed at the position of the first rector of Armenian Agricultural Academy (1994-1998), in 1998-2018 the university was headed by A.P. Tarverdyan, correspondent member of the RA Academy of Sciences, doctor of technical sciences, and since September of 2018 the rector of the University has been elected Vardan Urutyan, candidate of economics, associate professor of Texas A and M University, USA.

The Agrarian University being the unique state higher educational institution in the Republic is training skilled specialists in 32 fields (with 18 full-time and 17 part-time specialties according to the  list of specialties of bachelor’s degree for the 2022-2023 academic year, approved with the Ministry of Education and Culture of the Republic of Armenia) according to three-level education system, which enables it to be integrated into the international educational system. Taking into account the peculiarities of agrarian education and the importance of gaining practical knowledge and skills, the RA Government has set the period of four years for getting Bachelor’s degree in all the specialties at the Agrarian University.

In the 2021-2022 academic year, the idea of a working term was introduced for the first time in the higher education system of the country, during which students undergo trial training and perform paid work in partner enterprises and farms of the university.

As of January 1, 2022, the number of full-time students is about 922, in part-time education system there are about 2784 and at the college – 659 students. In all the specialties of the first and second year of Master’s Studies Department 195 students are trained.

The number of full-time and part-time Ph.D. students is 27, most of them being students from the Islamic Republic of Iran and from Syria.

Since September 2018, the Armenian National Agrarian University has entered an active period of reforms. On November 6 in 2018, at the meeting of the ANAU Board of Trustees  the new structure of the university, with its departments, was approved.  The structural subdivisions of Agrarian University with the available five educational departments are the followings: Agronomy, Veterinary medicine and animal husbandry, Agrarian engineering, Food technology, Agribusiness and economics, as well as: Part-time education and agribusiness departments, Agricultural college after A.Kochinyan, Base Lyceum, Vanadzor, Sisian and Shirak branches. Until 2017, the University had a branch in Stepanakert and until 2020, Russian branches also acted within the University.

Among the local and international scientific and educational institutions, the unique reputation of the Agrarian University is ensured by the highly qualified professorial potential. There are three professional councils awarding candidate and doctoral scientific degrees at the university: mechanization of agricultural production and mechanisms, agronomy, veterinary medicine and animal husbandry. The abovementioned boards award doctoral and candidate of science degrees in the 5 agrarian professions.

The scientists of Agrarian University carry out a number of research projects in the field of protection and improvement of the genetic fund of valuable varieties of crops and breeds of agricultural animals, veterinary medicine, up-to-date agricultural machines and equipment design, new technologies of processing vegetable and animal raw material and products, ecological, water and land reclamation problems, testing of effective measures and development of measures against plant diseases, plant pests, and weeds, as well as in the field of problems in agrarian economics. In the last few years the University scientists have cooperated with several international educational structures and organized international scientific conferences.

The library of Agrarian University is one of the oldest libraries in the Republic of Armenia. It has 550 thousand units of the book fund of diverse scientific, educational and informational literature published in different countries. Supported by the Food and Agriculture Organization of the United Nations, the electronic library has been operating in the University library since 2004. The necessary conditions are created in several reading rooms equipped with current technological innovations to conduct scientific and creative work. The ANAU history museum also has a variety of exhibition units.

Armenian National Agrarian University staff, entering the 9th decade of its foundation, creates its future with confidence, proudly accomplishing the important mission for our nation and state. 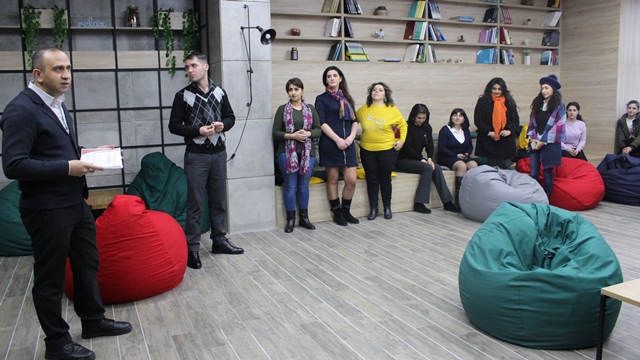 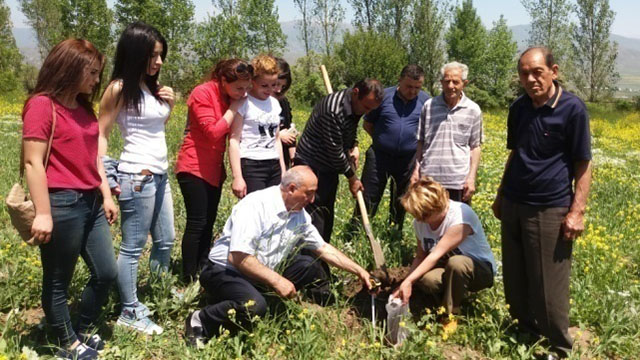 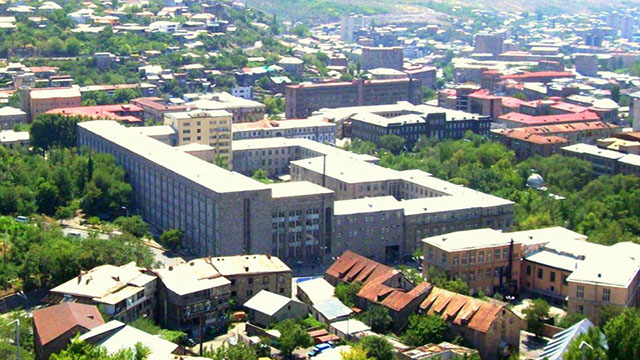